The parish church of St. Michael at Axmouth is home to three little-known but important and interesting medieval wall paintings.  Inside, painted onto late Norman columns, are murals of Christ and St. Peter, while around the rest of the church tiny traces of further paintings survive.  Various dates, from 1300 to 1500, have been ascribed to them by different scholars.  They were discovered, lying under lime-wash, in 1889, but after over one hundred years of re-exposure, lost much of their original brilliance.

Restoration work was carried out in 2015 (see leaflet at the bottom of the page) and they are now much easier to see and admire.  Visitors are asked particularly not to finger or rub the effigies in any way.

The largest of the paintings, located on the south aisle wall, appears at first to be little more than a mass of blurred bacon and egg coloured pigments.  A building firm named Hayward of Exeter uncovered this mural during renovation work in 1889.  Having never been properly identified, the image has been something of a local mystery.  The label in the church identifies it as possibly showing a bishop or Christian being tortured and as painted some time between the 13th and 15th century.  Through a careful interpretation of the image, it is possible to decipher what this painting represents, and to date it within twenty years.  To do so, we must first look at what survives of the painting.

Heavy black outlines mark the shape of a large and long-legged man lying on his back on a flat surface.  He is naked except for a mitre, and the faint trace of a halo can be made out around his head.  Above his feet is a large wheel, clearly visible in black paint against a deep red ground.  The man has his arms behind his back, and his legs are pressed together, giving the impression they are bound.  Above his chest is a smaller cog.  Between the two teeth-wheels runs a long bar or pole, implying the framework of a winching mechanism.  By strengthening the visible lines of the composition it is possible to reconstruct the image.

Now, in medieval art, a winching mechanism together with a naked bishop lying on a board immediately says one thing: that this is a painting of St. Erasmus.  Almost nothing is known of the real man except that he died in about 300AD at the hands of the Romans, and was Bishop of Formia in Italy.  Later writers and artists constructed a grisly legend for Erasmus – that he was executed by the Emperor Diocletian by having his intestines winched out of him with a nautical windlass.  The association of Erasmus with the marine winch seems to have arisen because Erasmus is described as once preaching during a thunderstorm, and being unafraid of thunderbolts.  As a result he became patron saint of sailors, who had obvious reasons to fear storms.  They named him St. Elmo.

Other depictions of Erasmus’s martyrdom are composed in the same way as the Axmouth painting.  To give one example, the Society of Antiquaries of London has an oil painting dating from 1474 showing Erasmus being disembowelled by a windlass.  Again, Erasmus is shown naked but for a loincloth and mitre, and over hum runs a long winch, behind which stands Diocletian, who is depicted as a medieval king.  The date of the Axmouth St. Erasmus mural is a little later than then Society of Antiquaries’ painting: Axmouth’s version was painted about 1480-1500, at the same time as the other two wall paintings of St. Peter and of Christ as the Man of Sorrows.

Erasmus, very popular amongst sailors and ship-building communities was also venerated by weavers and spinners because the windlass resembled a spinning wheel.  Significantly, we know that Axmouth had both sailors and cloth-workers. The 16th Century writer John Leland called Axmouth ‘an old and bigge Fischar Toune.’  The wool industry thrived in Devon with Exeter a major centre of cloth exports.  During the last years of the 15th Centiry the West Country ports were becoming busier with ever more adventurous voyages of trade and discovery, making for a spiritual niche for a saint like Erasmus with sea-going connections.

Unfortunately, Axmouth did not share in the boom in maritime prosperity.  By about 1450 the mouth of Axmouth harbour was clogged by a great shingle bank, formed of what the locals called ‘beach’: gravel, sand, shells and the like.  The Axe estuary, once half a mile wide, silted up.  Local men made several attempts to clear the harbour, but to no avail.

Given this setback, the painting of Erasmus may have been installed in Axmouth church as an attempt by locals to revive the area’s fortunes as a commercial port.  Erasmus, who was considered a generous saint, was, therefore, not only the ideal saint for flourishing maritime and cloth-working communities but for those, like Axmouth, in need of divine assistance.

The first painting represents an unknown saint, thought by some to be St. Peter, (it is unlikely that it depicts St. Michael as St. Michael has only been our own patron saint since Victorian times).

The adjacent column carries a representation of the Man of Sorrows (The Christ of Pity), in an Italian style, rare in this country.  It depicts our Lord after the Resurrection, and displaying the wounds of the cruel nails.

Miniatures of both images are incorporated in the great east window design of 1973.

This leaflet, available in the church, describes the paintings and their restoration. 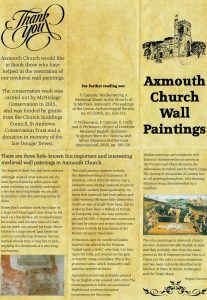