The History of Axmouth Church was first compiled in 1976 by the Reverend Prebendary John Mapson, BA.  (Formerly Vicar of Axmouth with Musbury).  This history was then revised and updated in October 1999 by Graham C. Myers.  The history was further collated in digital format by John Myers in January 2010, and published on the Axmouth Church website in February 2011 by Revd Gavin Tyte (vicar of Uplyme with Axmouth).  Further updates have been made by the Secretary to the Axmouth PCC, Iain Purdon. 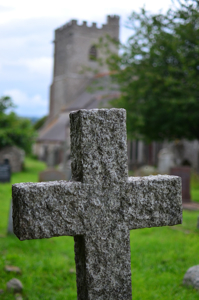 It is believed that Christian worship has been practised on this site continuously for at least one thousand years, and probably even longer than that.  Nothing now remains from this remote past, and the first structure of which we have definite evidence was a complete rebuilding in the Norman style of architecture, thought to have taken place around the period 1140-1150.  Parts of this Norman church can still be seen today, notably the finely-carved North doorway (many centuries older than the inscription added in 1698), and also the lower parts of the main walls of the nave and chancel. The South Aisle was built, either at this time, or maybe a few years later.

The massive pillars, which separate the South Aisle from the nave, required major strengthening, probably soon after 1300, when the South Aisle itself had to be rebuilt.  Other large-scale additions and alterations were made, probably about 1490, with the result that by then, when the building had evolved into something like its present-day appearance, it contained a wide variety of architectural styles.  Also, the tower was by now standing in its present position at the west end, replacing an earlier tower at the south-east corner; and the north porch had been added.  This porch gave protection to the Norman doorway, particularly so when bricked up from the outside and used as a vestry, being reopened as a main entrance in 1887.

For the last 500 years, large-scale alterations have been few, the principal one, in 1889, bringing the benefit of a substantial robing vestry, situated at the north-east corner of the building.  It is of interest to observe the outer doorway to this vestry, which is of medieval origin, and was removed from elsewhere in the building during this work. A large gallery, of timber construction, stood at the west end of the nave from about 1715 until it was demolished, also in 1889.  So we conclude this very brief outline of the main stages in the evolution of our Parish Church, and examine a few of its features in greater detail.

Made by a local stonemason who lived close to the church.  It was placed where it now stands in 1889, replacing an earlier font, which was situated to the south of the tower arch, but has disappeared without trace.  Behind the font may be seen the wall tablet inscribed with the names of local men who lost their lives during the two world wars.  Another large war memorial stands outside in the churchyard.

The Tower rises to about 56 feet (17 metres) and is surmounted by a small turret on its north side.  Access is gained by an interior stone stairway, but as this is considered dangerous, it is not open to the general public.  The Tower Clock, installed to mark the Diamond Jubilee of Queen Victoria in 1897, is by Gillett & Johnson of Croydon. There are three bells, bearing dates 1612, 1661, and 1755.  To reduce stress on the tower structure, they are nowadays chimed, not rung, and an apparatus for this purpose was given in 1953. 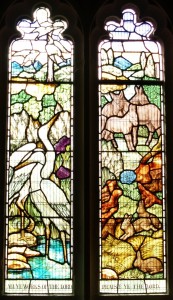 None of our glass is ancient.  Most was donated at the time of the restoration of 1889. The three much-admired South Aisle lights replaced earlier plain designs during the early years of the 20th century.  The great East window is modern, and dates from 1973.

These may be seen on the pillars on the south side of the nave.  They were uncovered, lying under limewash, during the works of 1889.  Various dates, from 1300 to 1500, have been ascribed to them by different scholars.  Many years of re-exposure have caused some fading, but representations are included in the design of the East window.

The Hagioscope or “Squint” pierces the massive pillar separating the nave from the Bindon Chapel.  In pre-Reformation days it allowed the congregation to observe the priest celebrating the Mass at the holy table, with its associated medieval piscina (rediscovered in 1889), set into the adjacent wall, beneath the east Bindon window.  It has no function in modern worship, but forms an unusual and decorative portion of the church fabric.

The Hallett Monument forms a most imposing memorial to members of this family, several of whom were Lords of the Manor of Axmouth.  The edifice was erected in 1749.

The Organ was built personally by a later member of the Hallett family, and presented to the church in 1865, after his death the previous year.  It has been subject to enhancement and modifications over the ensuing period.  Originally placed in the old gallery, it was moved to near to its present position in 1889, and brought forward a short distance in 1989.

A public electricity supply reached the church in 1955, when an organ blower motor was installed, to be followed late the following year by replacement of the old oil lamps by electric lighting.  A heating stove had been placed in the nave in 1865, as a pre-condition for the gift of the organ, and a ducted warm-air system, fed from a stove in the vestry, followed in 1889.  The first central heating scheme dates from 1915, converted to oil-firing in 1969, this being upgraded in 1992.  Piped water arrived at the vestry in 1989, enabling us to install a sink unit and modest catering facilities.